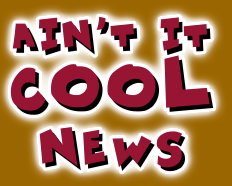 Taking heavy inspiration from IT FOLLOWS, THE CHOSEN possesses some potent scares despite its familiar themes of a curse passed on from one person to another. IT FOLLOWS wasn’t the first film to focus on this type of curse. J-horror and its American remakes practically cornered the market on the subgenre during the 2000s, mixing it with technology as with THE RING or just straight up passing from one person to the next with THE GRUDGE. So while IT FOLLOWS immediately popped into my head while watching THE CHOSEN, it’s different enough as it also riffs on films like INSIDIOUS with a child haunted by a demon from hell being its main conflict. Still, in the first paragraph of the review, when I am automatically comparing it to other iconic films, that’s never a good sign.

The modern family is a pretzeline sort of beast. With divorces and surrogate families all over modern society, the nuclear family is a tough thing to come by. So it’s no wonder this film is occasionally hard to follow, as the relationships between the characters are rather murky and unclear. Cameron (Kian Lawley) is the somewhat rebellious yet completely parentified child in a dysfunctional family. Mom (Elizabeth Keener, who looks too much like Katherine Keener to not be her younger sister) goes on long business trips, leaving her teen and tween kids to fend for themselves. Dad is out of the picture and raising his own new family in another state. Grandpa is wheelchair-bound and at death’s door with his senile wife not far behind him. Uncle Joey is a macho asshole. Aunt Jean is a drug addict. All of this negligence leaves little Angie (Mykayla Sohn) easy pickins for a demon to come in and steal her soul. Now Cameron must find five souls in his family to offer the demon in order to break the family curse and get Angie back. With a shit family like this one, it shouldn’t be hard for Cameron to fulfill this demonic exchange.

I like the SOPHIE’S CHOICE-like concept here where Cameron must choose between members of his family in order to save the soul of his innocent sister. Pretty much every person in Cameron’s family has given him a reason or two for him to choose them for the sacrifice. Then again, it challenges the “blood is thicker than water” credo that I have always felt was important in my own life. Here Cameron doesn’t really have those ties as his family is pretty despicable, and I think because the family is comprised of assholes it really doesn’t make this choice very hard at all for Cameron and thus the personal conflict isn’t as potent as I feel it could have been. Once the absolute shits of the family are taken care of the choices are a little harder for Cameron to pick from, but still, I don’t think the conflict is stretched to the maximum here and I was left wanting a bit more drama. As is, I think the setup is a winner and it makes for a fun time to see Cameron decide who lives and who dies and how far he will go to achieve it, but the story makes it easy for Cameron to make the choice and stories should never take it easy on their characters.

While the acting is pretty convincing across the board, the one thing that irked me about this film is that Cameron becomes somewhat of an expert spellcaster by the final act, fully accepting the dark arts, smearing his blood in sigils, and cursing folks left and right. It just felt like this evolution of the character moved way too fast to be convincing enough for me given the amount of time Cameron had to learn these curses. The world of the curse isn’t really fleshed out, either. We are given a magic book and it pretty much has everything you need to know about Angie’s predicament in it. I guess a book is better than Lin Shaye spouting a long diatribe about the Further, but still, neither makes for compelling cinema. This felt like lazy writing, and I would have liked to have seen the information come to Cameron a little more organically than just reading it from a book.

THE CHOSEN is not a bad film. There are some competent scares throughout (though the CG isn’t the best). The look of the possessed girl with black eyes and the no-mouthed demon from the poster are both pretty effective, and while there are some real groaners in terms of lines (the line “Let’s go to hell!” made me wince so hard I almost sprained something), there’s enough here in terms of solid acting and thrills to have a decent time with.